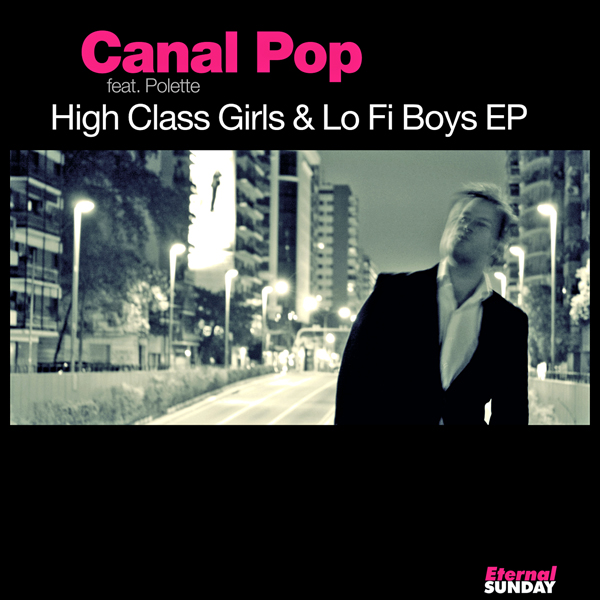 January 16, 2012
Canal Pop feat. Polette
Eternal Sunday
Producer: Emiliano Canal
Number of discs: 1
Get it on iTunes!
1.Two Of A Kind
2.A Place
3.Electricity
4.For Falling (In Love)

Catchy electropop with ironic lyrics and carefully crafted vocal arrangements. That is, more or less, the definition of Canal Pop’s music given by Emiliano Canal, the man behind the project. And the 4-tracks EP High Class Girls & Lo Fi Boys is the proof that the definition still applies.

“Contrary to what people may think, catchy pop music is very difficult to make, because you have to combine a few very effective elements in a very little time, and everything has to fit perfectly. Anyone can make an experimental 15 minutes ode full of chords and strange noises, the difficult think is to make people dance in 3 minutes”, says Emiliano about his songs. Maybe he knows what he talks about, since he’s the owner/ director of Eternal Sunday, a label specialized in releasing Argentinean artists who sing in English, and that job forces him to listen dozens of new bands and songs every week.

“I love to own a label but the cons are that it takes time away from my own musical projects like Canal Pop. The label forces you to think and work in a different way, especially about marketing and airplay, and it becomes difficult to sit at the studio to mix a song or to simply try new music ideas at the keyboard. It’s like owning a football team and wanting to go to kick a corner shot at the same time, it is not very practical.” Maybe because of this High Class Girls & Lo Fi Boys is a 4-tracks EP. “To record and finish a complete album was taking too much time for me, and it’s not that important nowadays since people consumes music in a different way. I think it’s better to have an EP with four solid songs and not a 15-tracks album with ten fillers”.

After a first listen, the four songs in High Class Girls & Lo Fi Boys seem to be solid enough. “Two Of A Kind” opens, a story with a somehow erotic innuendo and sexy plays of words (“we’re two of a kind, ’cause you’ve got a sexy body and I have a dirty mind”). “A Place” follows, based on a true story, a song that describes a confused girl who doesn’t know if she likes girls or boys. “I went out with some friends and a pretty girl came to say hi and when asked how was everything she said not very good, because I don’t know if I like girls or boys”, Emiliano remembers. This song has a lot of fans, and I suppose it is because it’s about being young, not knowing what you want, being afraid of showing yourself the way you are, wanting to go far away, and all the issues of sexual ambiguity, of not matching a certain social ideal. The third song is “Electricity”, a song that was chosen in 2011 (among thousands) to be part of the Face The Beat compilation, released by the portal/ magazine Side Line, from Belgium, property of the owners of Alfa Matrix, the most important electro/ industrial/ EBM label in the world. “All the classic electropop band have a song called “Electricity” and I didn’t want to be exception”, explains Emiliano. “Of course I tried to give it a sexier connotation (‘plug your love into me’) because I like to make those plays of words. I think it worked, because the people from Side Line liked it and they have more than a thousand tracks to choose from for their compilation”. The EP closes with “For Falling (In Love)”, a song that Canal Pop recorded a few times before but was never released. “The chorus simply came to my head. I was in my apartment and heard on my head the ‘Oh eh oh, this is a night for falling in love’. I sat at the keyboard and noticed that the musical phrase had a 2/4 bar that complicated everything, but the melody was so catchy that I wrote the rest of the song. I needed to record several versions to be satisfied, when you have a very catchy idea everything you add on top of it tends to interfere”.

As Canal Pop, Emiliano Canal works alone (“I deal with enough musicians as a label owner”), so all the keyboards, the production and the arrangements are his. The exception are the voices, Canal Pop has collaborated with very interesting female singers like Gaby Laguzzi (We Never Play Live In Buenos Aires, 2007), Bea Conenna, born in New York (Ecstatic Days single, 2008), sexy Lara Sambert who later appeared on prime time Argentinean TV show Cantando Por Un Sueño, the equivalent of Singing With The Stars, and who toured Greek and Turkey) (An Electro Tribute To Oasis, 2010) and this time Paula Varela AKA Polette, one of Buenos Aires’ top singers and sessionist who shared stages with Shakira, Deep Purple and countless other local stars. “Polette is, by far, the best singer I worked with. It is not only about singing nice, but about understanding what the producer and the song need, and Polette has an unique quality, she sings my songs in a nasal, Kylie Minogue way, after that she goes to a jazz club to sing jazz or funk like a diva and then she records a jingle for a canned soup, and she does everything right. That’s why everyone calls her, it is an honor to work with her”. As in every Canal Pop release, the vocal arrangements are very precise and elaborated, with crystal clear backing vocals coming and going, with little delays and echoes here and there (only noticed with headphones and the traditional robot-like vocoder and lo fi vocals. Canal Pop is back.